£100,000 stolen from Salford bank by armed robbers in Mini Cooper 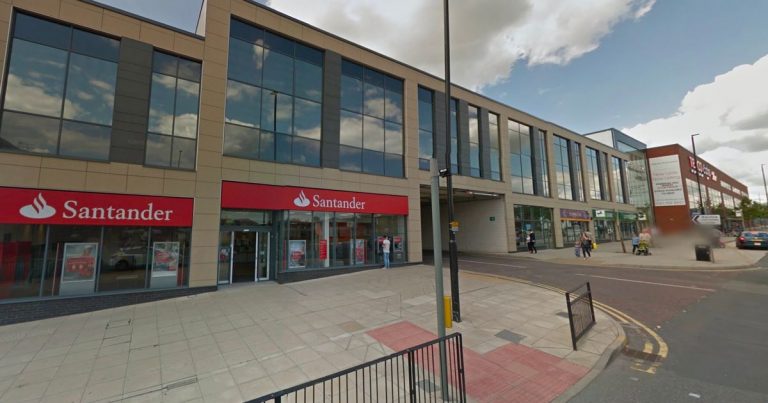 More than £100,000 was taken in a terrifying raid on a Salford bank. Gunmen escaped with after the robbery in which a G4S security guard was made to stay on the floor throughout with a pistol pressed into their back.

The robbers gained entry by tailgating an on-duty guard as he went back into the bank before forcing their way behind the counter.

The group of individuals made their way into the bank just before 1.20am armed with a handgun and machete.

Two members of staff were threatened by the armed robbers and one of these victims was made to lie on the floor whilst held at gunpoint.

The trio then fled the scene in a rather unusual getaway vehicle – a red Mini Cooper. The car was later found abandoned near to the scene of the crime, behind shops at the nearby Sportside Avenue.

A statement from the bank said: “”Santander can confirm the attack took place whilst G4S staff were in our branch at the Ellesmere Shopping Centre, Walkden, delivering cash.

“No Santander staff were present at the time of the attack. We are cooperating with the Police and will assist in any way we can to help catch the individuals who committed this crime.”

Head of operational risk for G4S Cash Solutions, Gareth Skinner, said: “On Thursday 7 September, two of our cash couriers were the victim of a vicious attack during a routine service on Bolton Road, Walkden near Manchester. While our colleagues have not suffered any serious injuries they are understandably very distressed by the attack.

“We are working closely with the Greater Manchester Police and I would urge anyone who may have been nearby and seen this attack to get in touch with the police or dial 101 so that those behind it can be brought to justice.”

Greater Manchester Police continue to examine CCTV of the incident and Police Sergeant Natasha Evans of GMP Salford borough, said: “This was a horrifying attack, which has left the victims extremely shaken. Thankfully no-one was injured, but that doesn’t excuse the terrifying ordeal that the victims had to endure at the hands of these violent men. I would urge anyone that was in the area at the time of the robbery that thinks they might have seen anything that could help our investigation to please get in touch.”