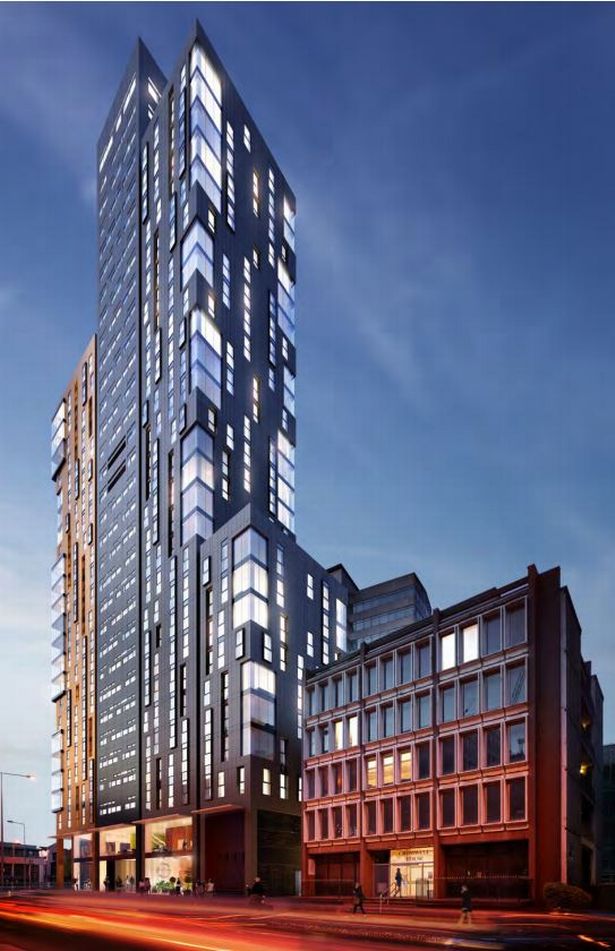 A what has been dubbed “landmark” development of four interconnected towers of student accommodation in the centre of Cardiff looks set to be approved in the upcoming weeks.

The plans show the ideas for developing four towers that would be connected to one another that are set to be built on the site of the existing Hallinans House, located just off of the junction between Fitzalan Place and Newport Road.

The building that currently exists on the site is set to be demolished to allow room for the four buildings of varying heights, each between 11 and 32 floors high.

Each of the towers would be covered in a copper, charcoal and zinc finish and the development overall would boast a total of 464 rooms for the students to live in.

There are also plans for the buildings to each contain a gym and a laundry station in addition to the quiet study areas and the open plan communal living spaces.

The plans suggest that the ground floor is set to have two commercial units and the development will include 134 spaces made available for bicycle users.

At the meeting of the Cardiff council planning committee on Wednesday, councillors have been strongly advised to approve the proposed scheme.

So far, one objection has been received from a Cathays resident who is concerned by the size of building.

“Such a development would be intimidating and threatening. The site is far too limited for such a high building.

“It is completely unrealistic to think that providing places to keep bikes is sufficient for students these days. A considerable number of them drive cars and certainly should permission be given for a development like this, it should be ensured that there are plenty places for parking cars so that the development does not cause more parking problems for other people who use that part of the city.”

Another objection was also received from the owners of the property which sits behind the site. The comment was put forward by RPS Planning and Development, and argues that no thought has been put into the “erosion of the Central and Bay Business Area”.

Other concerns have been voiced about adjacent properties being overshadowed by the build. “The overlooking and overshadowing is far greater than caused by the 2004 permission to extend Hallinans House. The impact upon privacy and amenity given the separation distance is again far greater than this permission. If development were to proceed it would stifle investment to convert Cromwell House to a hotel.”

Officers involved in the planning have protested that the proposals offer “an acceptable design” and will “provide a landmark feature that makes a positive contribution to this part of the city centre”.

The applicant, Boardroom Properties Ltd and Howells Properties, would have to pay £313,068 towards local schemes including air monitoring and alterations to roads.