Food review of The Bohemian, Wolverhampton 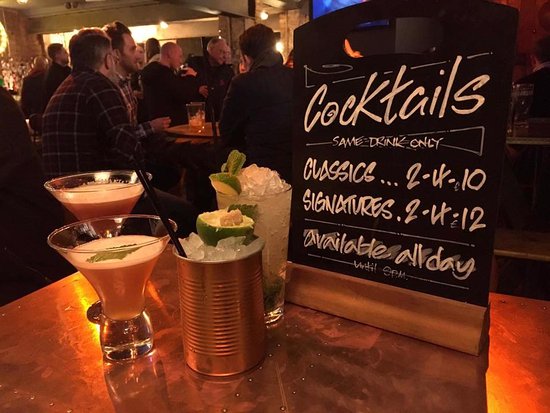 Previously the high street of Wolverhampton has only really presented a handful of choices of options for eating but over the past few years this has begun to change as a series of new eateries make their way to the city.

Now there’s The Bohemian, which is, strictly speaking, a cocktail and craft ale bar but which also serves food.

And so with a relaxed mid-week lunch in mind I made my way over there with two colleagues.

The Boho is an energetic and peculiar bar, with an industrial impression, decorated with reclaimed wood furniture, exposed light bulbs and graffitied walls.

We grabbed a booth, which bordered a weighty wooden table; it was pretty and secluded and could seat a decent size group.

Pizza is the main event at Boho and there’s a whole host of enticing topping choices, and they’re amusingly named too with ‘Meat the Focker’ ‘Caio Down’ and ‘You Feta Believe It’.

There are appetising sides too including Cajun-spiced fries and stonebaked garlic bread with Jack Daniels, barbecue fresh chillies and buffalo mozzarella.

I decided on a ‘make your own’ pizza with mozzarella and sweetcorn, which probably wasn’t my best idea because it was a bit dull though pleasant enough. It arrived on a big wooden board with its own pizza cutter leaving you the choice of how to cut it up – a good touch.

In the meantime, my colleague said her ‘Aloha’ pizza was a retro treat of ham, pineapple and melted mozzarella. She said the sharp sweetness of the fruit took the edge off the salty, well-cooked pieces of ham.

She washed it down with two glasses of Prosecco – the first, she said, was a bit on the flat side, though the next had the correct amount of fizz. Our male colleague flexed his masculinity and went for ‘all the meats’, a cheese and tomato pizza topped with steak, prosciutto, ham, salami and pepperoni. He was pretty impressed, describing the cured meats as tasting like hand-cut deli meats rather than slices from a plastic packet. He was, though, dissatisfied that the steak was overdone.

“Perhaps when they say ‘rare’ they mean it’s from an unusual cow,” he said. Very amusing. He accompanied the meal with a few pints of Boho Blond, a golden ale filled with fruit tastes.

Unfortunately, the Cajun-spiced fries weren’t so great. “I think these could have been really good,” stated our male colleague. And he was correct; hand-cut door-stop sized wedges that are nicely hot and crunchy with a fluffy inside would have been ideal

There wasn’t time – or room – for pudding, although the choices sounded wonderful. Next time, I’ll be choosing the churros with dips, or baked American cheesecake. There’s also a dessert pizza if you haven’t had enough, and some indulgent cocktails if you’d rather consume your calories in drink form . . . peanut buttertini?

The cheque came in at £50, which counted in a bottle of Peroni, two glasses of lemonade and the other drinks stated.