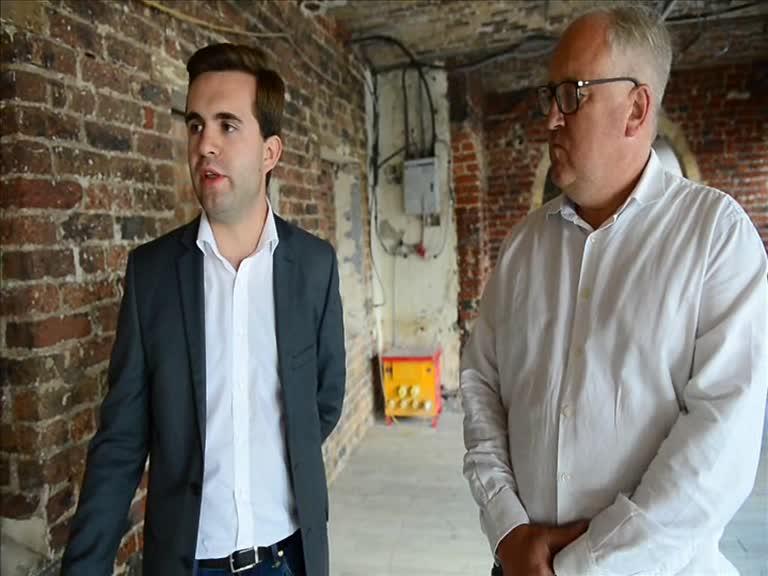 Well-known Potters hero Neil ‘Nello’ Baldwin plans to tap into his extensive list of celebrity friends and contacts to create a ‘hall of fame’ at a local revitalised former ceramics factory.

It is hoped that the names of famous celebrities and local personalities such as Ken Dodd will feature on tiles along the walls of the new Potbank cafe at the Spode site located in Stoke.

The so-called ‘Nello’s Hall of Fame’ is also planning to include a number of tiles bearing the names of couples who get married at the revitalised former factory, which is set to be turned into a brand new hotel and office space.

Local star Neil hopes that his Hall of Fame will help to boost Stoke-on-Trent’s recent bid to win the title of UK City of Culture in 2021.

Neil also has a slightly more personal reason getting involved with the exciting Spode project through his mother May who actually used to work in the factory when he was a young man.

He said: “I would sometimes come down here when I was young to meet her. I have some good memories of Spode and I am glad to see what is happening here. I have been down a few times and it looks great.”

The former kitman and Stoke City star Neil is a firm favourite with football fans after being recognised as one of ex-boss Lou Macari’s best ever player signings. He well and truly won over the hearts of supporters and fans with his antics around the famous club and has gone on to have a film made of his life called ‘Marvellous’ which went on to win a well-deserved BAFTA.

Neil is hoping that his high profile will mean that other celebrities will back the city’s bid for culture status.On this he continued: “I have many celebrity friends. I know that Ken Dodd has already signed up to do a tile.

“I think Stoke-on-Trent will be a great place for City of Culture. Toby Jones, who played me in Marvellous, is very pleased about what we are doing.”

In the meantime, work is continuing well on the site with the developers Dog and Bone Projects Ltd very pleased with the efforts. Jeff Nash, the company director, said: “We have been able to work with many of the original features. We saw such potential with this site and have very high hopes.”

The home of the hall of fame, Spode factory, last closed its doors in 2008 before being later bought by Stoke-on-Trent City Council for an estimated £3.5 million in 2010. In March last year a multi-million vision was unveiled for the site with work continuing since then.

Local councillor Daniel Jellyman, the cabinet member for regeneration, transport and heritage, said: “Spode is coming on leaps and bounds.”

For details on how to get a tile, email nello@potbank.co.uk

Share. Facebook Twitter Pinterest LinkedIn Tumblr Email
Previous Article‘Family-friendly’ restaurant charges enraged mother £2.39 for empty bowl for her 20-month-old son
Next Article 2,000 sign up for Stoke 10k a year after event cancelled due to cyber attack – take a look at the route and road closures here