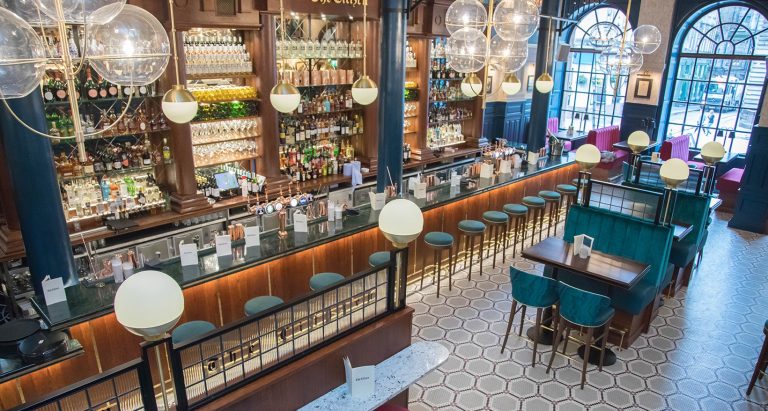 A brand new bar and restaurant with direct connections to a proud Glaswegian past opens its doors today in the city centre for the very first time.

Sitting at 24 St Vincent Place, right at the heart of city life, The Citizen Bar and Dining Rooms can be found. Since the announcement of its opening there has been a real buzz in the community in anticipation of its arrival.

Part of this sense of excitement most likely stems from the premises themselves, a magnificently restored listed building which will now boast a dining area, 218-seated bar and a private dining room. Others are waiting in anticipation to find out what DRG, the owners and restorers behind several key Glasgow institutions have achieved with this latest project.

Despite being the new and upcoming place to be on St Vincent Place, the Citizen also boasts strong links to Glasgow’s heritage, as it resides in the old offices of the Evening Citizen, from which it also derives its name.

Published as an evening version of the Glasgow Citizen, this daily newspaper was founded in 1842 and first published in August 1864 and was one of the first of three evening newspapers to be printed, published and sold in the city.

This building on St Vincent Place was home of the paper from 1889, until Friday March 29 1974 when they printed their final edition.

Now this re-opening of the Citizen establishes once again that link with the history of the city. The venue is very aware of its past and look to embrace it by featuring displays of front pages, old stories and photographs from the original paper and provided by former Evening Citizen photographer, Stewart Fair who started work with the paper in 1953.

Tony Conetta, director of the Di Maggio Restaurant Group said that: “The Citizen has given DRG another opportunity to bring an old Glasgow institution back to life.

“When we started this project it was with the view to have as many issues of The Evening Citizen as we could get our hands on. Our historian spent months at The Mitchell Library archives singling out interesting headlines, stories, old adverts, and photographs. We eventually put our focus into trying to find archive images of the building and learning more about its past and the people who worked there.

“When it came to selecting the final artwork, we decided to extend a hand out to Lost Glasgow, everyone’s favourite Glaswegian history page, and it did not disappoint. Our first contact was with retired Evening Citizen photographer Stewart Fair, who happily donated original images and newspaper articles from his time at the paper.

“We’ve also aimed to replicate this unity between past, present and future in our food and drinks offering. We’ve installed Glasgow’s favourite lager Tennent’s and will be the first location in Scotland that it can be drunk brewery fresh from our Tank Beer system.

Everything you need to know before Oktoberfest comes to Glasgow