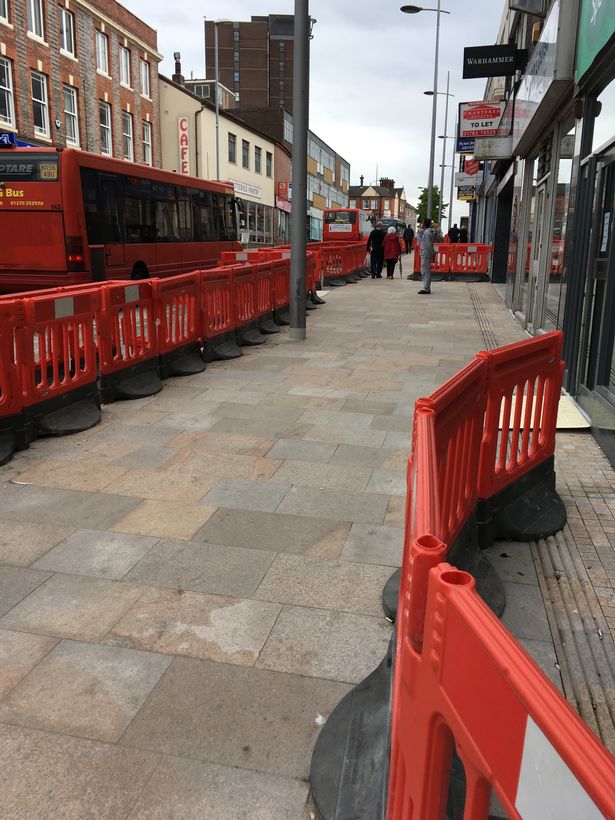 Key traders on a busy street in the centre of Stoke that is currently in the middle of major overhaul works say that the construction should have been done in stages.

Despite their claims that the project has seriously affected trade, Stoke-on-Trent City Council have been defending the timings of the public realms work. Being carried out along Stafford Street, the council have claimed that the final results of the changes will represent a significant improvement for the area.

The project is a part of a scheme across the Hanley region that is set to cost around £10 million overall and the work will stretch throughout the area. Work as part of the project has so far seen the (one-time) Crown Bank toilets demolished along with numerous unused bus shelters whilst pavements are revitalised for pedestrians.

Although shoppers can still technically access all of the businesses lining the route, certain stretches of footpath have been closed at various points to allow the works to continue as planned.

It is because of these closures along with the diversions and the noise from the works that local businesses are claiming that their takings are down directly because of the project. They suggest instead that the local authority should have better planned the scheme to allow works to take place in less disruptive stages.

The owner of Boden’s Newsagents, one of the affected businesses, has clearly seen business take a hit saying that “My business is down to a third of what it was before the road works.I am not complaining about the works being done I am talking about the way the work has been done.

“The council should have done one bit at a time. There are businesses here that need to make a living.We pay our rates to the council. They should have worked out a way of doing the pavements in front of the shops as quickly as possible to minimise disruption.”

Karen Taylor, manager at the Age Concern charity shop said: “I have seen people not know where they are going with the road works. It has had a massive impact on us. I cannot talk about figures but the impact has been huge.”

Stoke-on-Trent City Council’s cabinet member for regeneration, transport and heritage, Councillor Dan Jellyman, argues that traders have been regularly updated with progress of the works. He says that: “The work on Stafford Street is part of the £10 million programme of improvements to the public realm that we are carrying out across the city centre.

“There has been a clerk of works on site every day who has kept in regular contact with traders, and we are aware of one complaint to date.

“We have every sympathy with traders, however, on a project of this scale it is inevitable there may be a degree of disruption. We hope this long-term transformation will alleviate the short-term inconvenience that is unfortunately necessary to enable the work to be carried out.”