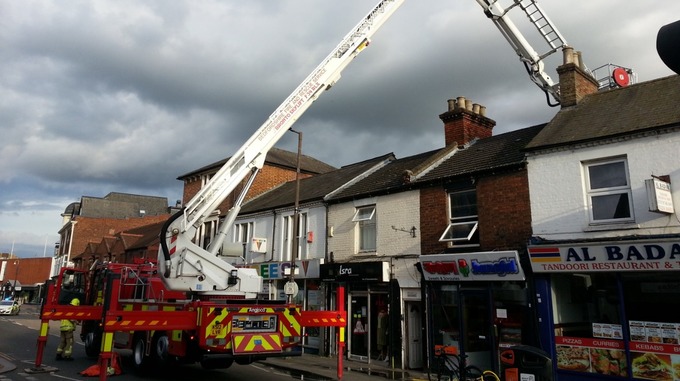 A ferocious fire that started at the well known Al Badar restaurant in Midland Road of Bedford has left the building critically damaged.

A takeaway restaurant and the flats that resided above it have been almost completely destroyed in a tragic fire that started in one of the deep-fat fryers on the property in Bedford.

A small team of firefighters were called to the location of the Al Badar restaurant in Midland Road after reports of an outbreak of fire on Sunday afternoon.

The fire was very ferocious in nature and as a result the flames had spread to beyond the kitchen area of the restaurant and had managed to make its way into the ducting of the building before subsequently getting into the roof of the two and three storey terraced property.

The threat of the fire was increased further as the flames extended beyond the confines of the restaurant and also spread to the residential flats that are in place above the restaurant.

Four fire engines were called to the scene of the fire and it took a total of more than three hours from start to finish to the firefighting team to be able to comepltely put out the fire.

One of the firefighting team involved with the attempts to extinguish the blaze was Watch Commander Steve Duffy, a well known and respected member of the Bedfordshire Fire and Rescue Service. In a statement on the fire, he explained the exact dangers and difficulties of dealing with this particular blaze and the environment that created it. He explained that: “This was a complex building to fight a fire in and the rapid offensive actions of first crews that arrived prevented the fire spreading to the surrounding buildings and the probable loss of the terrace, which included several businesses and homes.

“The crews did well to contain this serious fire and I would like to thank them for their swift actions.”

The voracious fire left the entire ground floor of the building a staggering 75{4fdb5acd4891bace33ada2338e55dfcfb4968d3d0c3ddd4319d06b6e16894e20} damaged by the fire, and the accompanying heat and smoke that can often prove just as deadly or damaging.

The first floor of the building and the roof void above it were graded as being 50{4fdb5acd4891bace33ada2338e55dfcfb4968d3d0c3ddd4319d06b6e16894e20} damaged by fire, heat and smoke following a thorough examination of the whole property that was carried out by a number of crew members from the Bedfordshire Fire and Rescue Service.

The Bedfordshire Fire and Rescue service team announced that after an investigation they were able to confirm that the fire had been started accidentally in the kitchens of the restaurant and that thankfully there had been no casualties associated with the blaze.