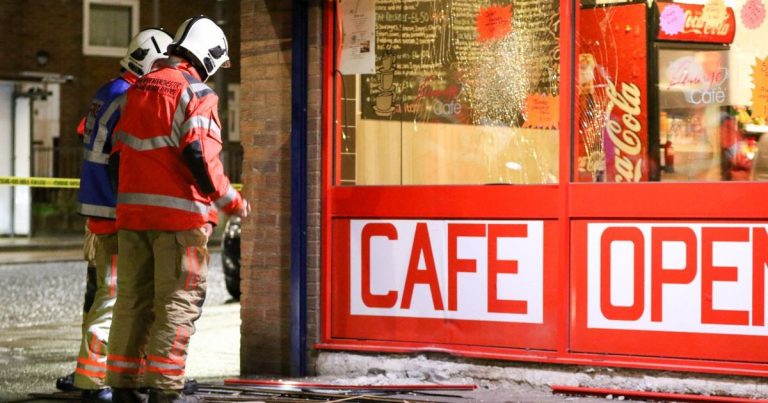 A loud explosion was heard across Greater Manchester just tonight after an industrial firework was exploded unexpectedly outside a local cafe.

Both the police and the local fire service were overwhelmed with numerous calls just after the detonation, close to the intersection of Gerald Road and Whit Lane in the Salford area, shortly before 12.30am on Tuesday morning.

Several inhabitants residing close informed the emergency services of how their homes ‘shook’ when the device blew up near to a row of shops.

A spokesman for the GMP has confirmed that an industrial strength firework was detonated close to a local cafe.

The enquiry into the event is being directed by the fire service and is not believed to be related to terrorism at this stage of the investigation, the spokesman continued. It is as of yet not known precisely the extent of the damage that has been done to the property but the cafe’s front window was confirmed as having been broken when the device was set off.

A flood of reports were posted on social media very soon after the explosion, with folks as far away as Prestwich and West Didsbury sharing reports of hearing the bang.

Hayley @HayleyKennyMCR tweeted on the events of the night at 12.47am: “Anyone just heard a loud bang in Salford? Trying to find out what it was, seems a few other people heard it too.”

Moidov‏ @moidov added soon after: “Just heard a loud #explosion and felt the boom in my house in the M7 area of #Salford #Manchester. Anyone know what it was?”

BeastieLucifan @samjackwolfcarn posted online: “Any update on the big bang that’s been heard over Salford and other parts of Greater Manchester. Worried.”

Rachel Gerrish @RLGerrish posted with her concerns: “Large bang then sirens heard in West Didsbury. Does anyone know what’s going on?”

PsychosoMatic31 @exquisitelydom once again tweeted: “What on earth was the big bang in Manchester? Heard it in Prestwich, didn’t sound too clever.”

The most recent occurrence trails reports of a very large firework being set off in the Eccles area of Greater Manchester on the most recent Saturday night .