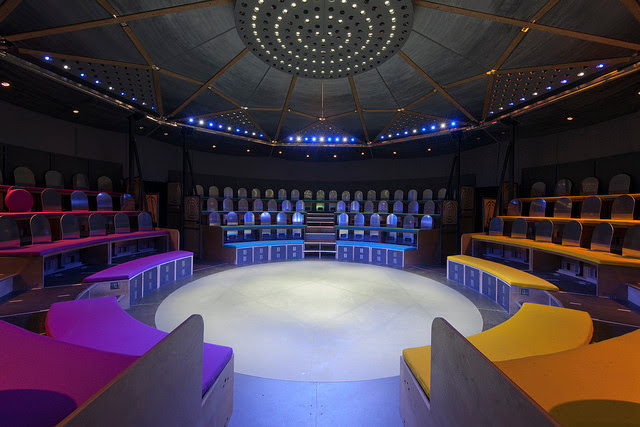 The lucky residents of Little Hulton in Salford are all set to welcome a 160-seat pop-up theatre into their midst. Opening up next month for the first time, the culture hub will be located in local Peel Park.

Called Roundabout, the venue is the genius creation of a theatre company based in London called Paines Plough. They focus largely on presenting new and upcoming work by acclaimed playwrights.

Its prime position in Peel Park was commissioned by The Lowry as a part of its enthusiastic commitment to bring the thrill, excitement and drama of live performance to all everyone in Salford and not to limit the experience to only those who are able to visit them at home on the Salford Quays.

The chief executive of The Lowry, Julia Fawcett OBE, said in a statement that: “We fundamentally believe that our responsibility in terms of presenting work to audiences stretches far beyond the footprint of The Lowry building, or indeed the artistic choices of our creative team.

“Roundabout contributes significantly to that mission – not just because it presents work ‘on location’ so to speak – but because a central part of the line-up is programmed by the local community.”

Fawcett went on to add that: “The shows that we have programmed – Black Mountain, Out of Love and How to be Kid – are, we believe, some of the best new work on the circuit. We’re excited to present that work in the heart of Little Hulton alongside the work of the community.”

In addition to the three new plays that have arrived fresh from the esteemed Edinburgh Fringe Festival, Roundabout will also present a small series of accompanying shows. These are set to include an extract from the classic and much-loved 80s sitcom ‘Allo ‘Allo with the local Peel Drama Group; Growing Pains by Tom Gill, a story about a working class boy who swaps his friends and the council estate he grew up on for a one-way ticket out of Salford; and Little Hulton Sings by Local Primary Schools from Little Hulton. All the shows are set to be a great selection of drama, excitement and fun for all.

The Roundabout company forms a part of the inaugural ‘Little Hulton Goes Large’ festival which is set to debut this year.

For further information or to find out about booking tickets, visit www.thelowry.com/events/roundabout-in-little-hulton.