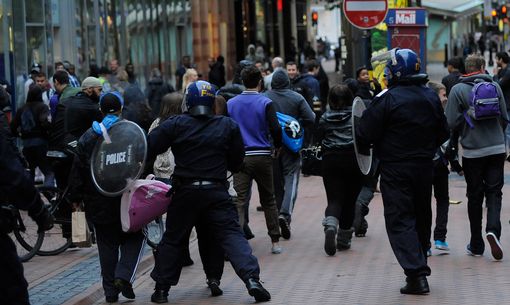 Rioters who raided Wolverhampton, West Bromwich and Birmingham in August 2011 experienced a strong ‘sense of community’, a newly released £730,000 study has announced.

Members of a number of rival gangs united to fight officers, raid stores and destroy buildings during the weeks of chaos.

The research by Sussex University, grounded in interviews with perpetrators, determined that linking together against a mutual enemy – the police – raised a sense of “community” among criminal rings more used to fighting each other, helping to fuel the havoc which included arson and mass lootings.

Researcher Dr John Drury stated: “”New research my peers and I have carried out on the August 2011 riots in England suggests the violence did not spread mindlessly. Instead, we found that people were influenced by a sense of shared identity against the authorities, that transcended even the ‘postcode rivalries’ of local gangs.

“”Our preliminary work on the riots that spread across English cities suggests social identity – rather than simple spontaneous contagion – shaped much of the behaviour that took place. First of all, not everyone in the affected cities joined in. Those that did shared an anti-police identity.

“Second, many of those young people who did join in would more typically have seen each other as rivals, based on long-standing conflicts between different districts of the city. We found that the shared antagonism towards the police meant that these rivalries became superseded by a stronger group identity. The feeling of power this created among participants is what helped the riots grow and spread.””

The violence in Wolverhampton started on August 9, 2011 – five days following the death of Mark Duggan in London which instigated the original riots in the capital.

In Wolverhampton the disorder started after 4pm when a violent crowd descended on the city centre, leaving a path of chaotic shops and blazing cars. Innocent passers-by found shelter in Wolverhampton’s pubs and fled for safety as the rioters threw missiles and ransacked shops.

Meanwhile, less than 10 miles away in West Bromwich, a forceful mob tore bricks off walls and burnt down a catering van.

In the weeks and months after thousands of individuals were sentenced across the country, with more than 300 perpetrators appearing before the courts in the West Midlands.

In contrast to riots formerly seen in England – like the infamous 1981 Handsworth riots – the turmoil in 2011 was clearly organised, at least in part, via social media.

Hooded youths descended on Wolverhampton, with the first sign of trouble coming when lots of shoppers were sealed inside the Asda supermarket near Molineux after a gang assembled in the car park at around 3pm. Shortly after there were reports of missiles being fired at Staveley Police Station in Whitmore Reans.

The effort of the trouble soon transferred to the city centre with an unknown explosive detonated in Queen Square at approximately 4.30pm.

By then around 300 youths had congregated near the Prince Albert statue, where they opposed police.

Share. Facebook Twitter Pinterest LinkedIn Tumblr Email
Previous Article2,000 sign up for Stoke 10k a year after event cancelled due to cyber attack – take a look at the route and road closures here
Next Article You must act quickly to secure a place at this year’s annual Business Breakfast