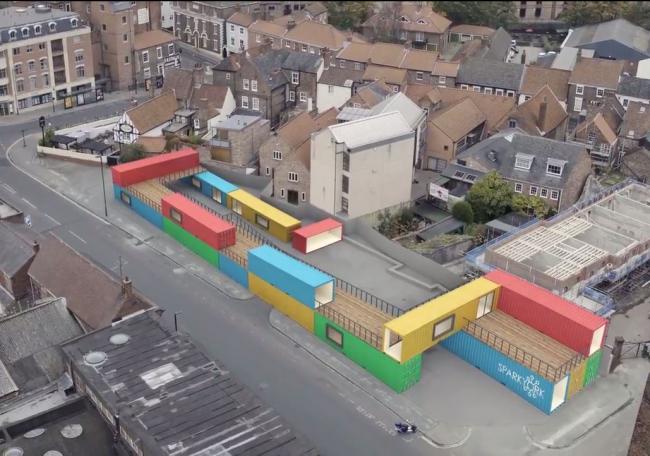 Containers have been lifted into put at the site of a disputable road sustenance complex and business start-up focus.

At the previous Reynards Garage site, there were cranes yesterday lifting the delivery compartments into put that will frame Spark: York.

Another rent of life will be handed and be fitted out with a scope of various nourishment slows down and workplaces to give independent companies a shot of looking for some employment space in the downtown area.

The designs have pulled in feedback and support, with some maxim the delivery holder building would be unattractive in a notable zone, and others are indicating a considerable extent of Spark: York’s floor space being reserved for nourishment and drink outlets as opposed to business space.

Be that as it may, the advancement was upheld by 500 individuals and City of York Council’s Planning Committee.

Organizers said the advancement would be impermanent and any mischief caused to the territory would be exceeded by the general population advantage in bringing liveliness, and significant group and business offices, into an available zone.

The improvement is the brainchild of Sam Leach, one of three Spark: York chiefs alongside fellow benefactors Joe Gardham and Tom McKenzie.

Just two councillors neglected to back the improvement, yet those in help said the site could be the impetus to change Piccadilly and carry it into line with the close-by Fossgate and Walmgate, which as of late have progressed toward becoming top choices with new and autonomous organizations.

Talking at the time, Cllr Janet Looker stated: “This is, extremely positive.

It’s fascinating to perceive what’s occurred with little, free, for the most part, sustenance and savour outlets Walmgate, which ten years prior was looking exceptionally sad for itself.

Cllr Peter Dew included: “My significant other and I went by Christchurch in New Zealand a few years back, and they have something like this.”

He included: “It looked great and did not look scruffy, which I know is one of the grumblings we have had about this.”