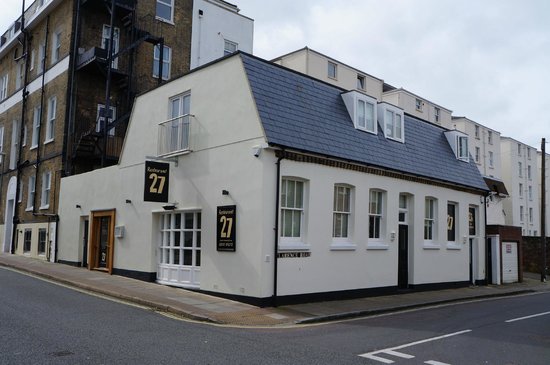 The boundaries of Portsmouth and Southsea are hard to tell. Much like those cities that are divided by either a river such as Newcastle upon Tyne and Gateshead or like Harrow and Wealdstone that is divided by a railway line.

The Restaurant has been in operation for eight years and this year, saw the restaurant receive an accolade of a Michelin Plate which is an award given for “fresh ingredients, used well to prepare a simple meal”

Getting to the restaurant rather early for dinner, (there was a party expected at 8), we discovered that the dinning the room has high ceilings and a low-lying floor. It made me keep looking at the way the passers-by calves were just moving across my friends head as we continued into the evening. There was a dark red and grey colour scheme with some well-organized art which included a giant hat stand that was made out of driftwood. The restaurant had a similar theme to a post restaurant in a certain soap opera.

The dress code for most diners is either casual wear or little black dresses. You can enjoy some background music in the dining room, which mask conversation from other tables.

The food presentation is beautiful and it’s appealing to the palates of the diners. A five course menu is available as well as another on of close to six courses which has various options which has very familiar ingredients and has been created with a lot of imagination.

The whole table has to either have the five or six course meal, even though they can make some adjustments within the two options. This adjustment is a good idea because you get the chance to try almost everything from the kitchen.

One option of the meal was a blackened sea bass fillet in a burnt apple sauce brightened up by a few drops of verjus. It also has a crumbly ‘shoulder of lamb’ sandwich which is rolled up in a thin sheet of crispy toast served with a mint sauce which is sharp and sweet. The ‘Umami duck’ which looked more like a ball of cotton wool because of sous-vide was a backfired effort in my opinion.

“The Dessert” is rather pricey for its taste. It did not seem to have much of imagination or creativity as it did five years back. It is not all that bad, with the three or four desserts presented in an artistic way surrounded by doddles of fruits coulis and ‘chocolate soil’. There is also an option of a small bun filled up with fruit cream.

The staff at Restaurant 27 are pleasant, knowledgeable and welcoming. The food is carefully sourced from various markets to give their meals simple flavour experiences.

The meals are rather pricey and there is a false sense of exclusivity even with an atmosphere that wasn’t all that formal inside the restaurant.